I’m in sales, but it doesn’t mean I’m trying to sell you something

In the late summer of 1993, I was with my sister and our significant others seated in the Merrill Lynch box at the old Louis Armstrong Stadium at the US Tennis Center in Flushing Queens. On the court, directly in front of us, we watched Pete Sampras win his second US Open Championship.

I went to several US Open matches during the early ‘90s. One time, the kids from Head of the Class were sitting in our seats when we arrived. They moved.

Through the ‘80s I saw a lot of Islanders hockey games from some very good seats along the blueline at the Nassau Coliseum on Long Island. Memorable among those games was Mike Bossy’s 50th goal in his 50th game and an amazing comeback in the playoffs against the Capitals.

In the early days, I was blissfully unaware of where those tickets came from. I knew my dad got them from work and that he worked “on Wall Street,” although I didn’t fully understand what that meant or what he did for a living. I eventually learned that my dad, while going to school at night, had worked his way up the ladder in various roles at large banks and at a boutique asset management firm. He started in operations and, over many years, earned a position as a fixed income portfolio manager (PM).

Over time, I learned how “relationships” in the industry worked and I came to appreciate that those seats at Islanders games (and tickets to the ’86 Mets World Series run) were from brokers who covered my dad when he was a repo trader. For his birthday one year, I recall a salesperson coming to the house with a case of Dom Perignon to contribute to the celebrations.

Then, he got laid off.

He believed he’d soon have a new role, a better role, in short order. But that wasn’t the case. He’d earned his undergraduate degree part-time, in the evenings, at a school known more for producing accountants than asset managers. He did not have an MBA or CFA. Wall Street was growing increasingly younger, and most PMs had far more letters after their names.

My dad learned that in the world of finance, you’re only as good as your last trade. The tickets, the dinners, the lunches sent to the office, and the baskets of fruit and cheer at holiday time were merely pay-back for trades executed and booked.

In retrospect, he didn’t have the kinds of relationships with peers in the industry who would make introductions for him. Except for one. Remember the case of Dom? That was from Steve.

Steve helped my dad try his hand at fixed-income sales at the broker-dealer where Steve was a successful salesperson. Steve had an existing book of business built over time. My dad, on the other hand, was a 50+ year-old salesperson without old connections helping to make new ones.  It was hard to get trades done.

Building strong professional (and personal) relationships does take work though. As good a man as my father is, he is also very shy.  And it’s tough to be shy on Wall Street.

Eventually, Dad left The Street and took a job managing the office of an industrial air-conditioning service company started years before by old friends. He was well paid for the owners’ peace of mind. The perks were no longer there, but the bills got paid. Plus, with a little luck from some stock options from the tech boom, Dad was able to retire comfortably. Things turned out just fine. My parents live a nice, retired life in Florida. And Dad has some great Wall Street stories to tell. He still connects with Steve regularly.

Lessons learned from a father’s experiences

My own journey through Wall Street, almost all of it on the service end of the industry, was informed by watching the relationships my dad thought were true and strong disappear when the commission spigot was turned off. That and a book on selling I read called Selling at Mach One by Steve Sullivan.

By the time I joined Bloomberg at age 30, I’d read as much as I could on selling and had determined that being good at sales doesn’t mean being good at transactional relationships. I didn’t want to be seen as a pushy “used car salesman,” no offense to used car salesmen!

At some point, subconsciously, I resolved to put my clients and colleagues first. To offer good advice. To be proactive and thorough and responsive and responsible and honest. In short, to do the right thing, as corny and, yes, perhaps, naïve as that may sound.

I knew if I always put clients first – heck, if I always put people first – and dealt with everyone professionally, that it would simply be a better, more enjoyable way to do business. Seeing what my dad went through wasn’t so much a transformative moment as it was confirmation of how I already believed business should be done, and how relationships should be built and nurtured. There was no shift in mindset, rather a gradual recognition that what I already believed was right.

After witnessing my dad’s challenges, I became much more vocal and deliberate in my actions to grow my relationships. It was never about what I would get out of a relationship. That said, I knew eventually this “people first” attitude would somehow find its way back to me and I’d be successful.

Has it? Yes. A resounding yes.

Can I put an ROI on it? How do you quantify the return on investment when the investment is in doing what’s right for others and nurturing strong foundational relationships in business? You cannot if you believe the return is the relationship itself.

Applying lessons to my role at Grandview

A few months ago, Grandview was in New York to meet with a large client. We put together a happy hour at a Midtown pub. It was a simple plan — gather as many people in our network as we could for a drink or two and invite them to bring along a colleague or client. There were people we had not seen in months/years and some people we’d never met. Good people connecting good people. The happy hour was a resounding success – 30 or so old friends and new colleagues networking together.

Right about now you’re thinking – well you bought a bunch of folks drinks, how is that new? What’s new is the mindset. We didn’t invite them as a sales pitch, and we didn’t expect anything in return. It wasn’t a bond broker inviting you to dinner at Sparks expecting a quid pro quo. Every invitation was – let me introduce you to some people who think like you, who are good to be around, and who might be good for your business someday.

We spent $600 and left with new alliances; an invitation to a consultant roundtable at Bloomberg; a new client lead; and a prospective hire. We also cross-pollinated business connections and former colleagues who had lost touch. Best $600 we ever spent.

Speaking of good investments, the best $200 I ever spent was at Gibson’s Italia just before the pandemic. I was a few months into my role at Grandview and a friend at a hedge fund suggested I meet with someone they had hired to work on an enterprise data project. He thought there might be a consulting role for Grandview. It was a great lunch (try the veal) and a great conversation that never touched on enterprise data. Instead, we hashed through endless mutual connections from our overlapping Bloomberg days and mused on never having connected there or since. Unfortunately, Grandview didn’t get the deal at the hedge fund – bad year, staff cuts, including my lunch friend, “Bob”.

So, you know what? We tried to hire Bob at Grandview. Several projects looked like great fits, and we kept the conversation rolling. We spoke often and discussed the opportunities I was trying to close. We also passed around his resume. Bob landed a leadership role at a huge stock exchange before I could get the deals closed that would facilitate Grandview hiring him. Then, he called me and hired Grandview! Last year that exchange was our largest client.

Obviously, it had nothing to do with the $200 lunch. It had everything to do with connecting with a colleague in the industry and building on that relationship by trying to help him when he needed it. Honestly, it wasn’t entirely altruistic. Bob would have been a great lead project manager for any number of data-centric projects we had in the pipeline. He just beat me to the finish line.

Bob’s a great client and a good friend to this day. True story – he texted me while I was writing the first draft of this blog.

I’ve got another story about a different client that reads almost exactly like the one above. The only difference is it started over lattes and croissants in New York, and not veal Milanese in Chicago. They became our top client this year.

Lead with people and relationships, and the rest (the best) will follow.

None of these stories could be told if I weren’t at Grandview today.  That’s the best story, and the shortest.

I knew Chris and Matt, Grandview’s co-founders; at one point, we collaborated for the benefit of a mutual client. I later reached out to them with some questions about market trends and to ask for advice about my next career move. Yes, I wanted information from them, but I didn’t come empty-handed. I had an idea for a new service offering for Grandview. But Matt and Chris had their own ideas. They wanted me for Grandview.

And, after reading this blog, you know exactly why.

Our SOC2 certified managed data and reporting platform, Rivvit, integrates disparate data to give clients a single source of accurate, actionable, and reliable data. Contact our team for more information about how to consolidate your disparate data sources into a single version of the truth for your organization by visiting https://www.grandviewanalytics.com. 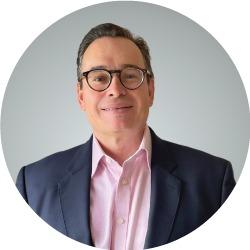 Charles “Chip” Rabus is Managing Director of Business Development at Grandview Analytics, where he drives the company’s sales and marketing efforts. Chip has more than 20 years of client service and sales leadership experience in the financial services, data, and technology industries.

Investment managers need accurate, timely and complete flow of information. This eBook explores five of the challenges that insurance companies face in relation to their investment data and offers possible solution designs to overcome them.

LIBOR Transition 101: What You Need to Know

LIBOR rates will cease publishing in June 2023. Are you ready? Read this blog for tips on preparing for LIBOR cessation.